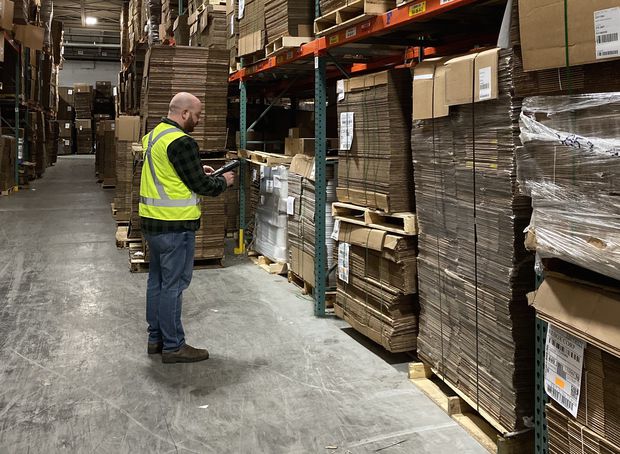 Investment in software leads to improved efficiency, visibility and better inventory management for used-boxed distributor Rebox – and gets the Montreal-area company hooked on innovation

The series: We look at decision-makers among Canada’s mid-sized companies who took successful action in a competitive global digital economy.

Jordan Biberkraut can recall the old days of doing business at Rebox Corp., a time when Excel spreadsheets and small accounting software were the norms for tracking inventory and sales.

But in 2014, the company, which is based in St.-Laurent, Que., realized that wasn’t good enough. With high-profile clients such as Amazon.com Inc. and Walmart Inc., as well as 30 distribution centers across North America, it wanted to better manage the contents of its warehouses in Quebec, Toronto, and the United States. Rebox decided that the endless paper invoices and redundancies, and the inability to track shipments in real-time, all needed to change.

“We had no visibility on our live inventory,” says Mr. Biberkraut. Plus, Rebox’s progressive and sustainable approach needed to be reflected in its operations.

In 2016, Rebox chose to partner with Nuage Technologies Inc., a Rosemère, Que.-based firm that consults on business process analysis and designs warehouse-management systems.

“We realized we needed to invest in software,” says Mr. Biberkraut, adding the firm wanted to be able to track vendor and labor costs, as well as employee tasks.

With Nuage’s help, Rebox underwent an almost year-long revamp. The partnership was a huge success, and for Rebox, the whole process has driven a quest for more innovation. “We’ve gone from a very old-school company to one that is data-driven,” says Mr. Biberkraut.

According to Mike Croza, managing partner of Supply Chain Alliance Ltd. in Toronto, Rebox is already at the forefront of change in supply-chain management, an industry that has seen a lot of disruption in recent years.

“A lot of companies have not invested in their supply chain,” Mr. Croza says. Many are struggling with labor shortages, as well as their process- and systems management, and as such are having difficulty effectively tracking their products and cash flow.

But he says some businesses like Rebox are waking up to the reality that their old practices are no longer serving their needs – or the needs of their customers.

Stéphane Parent, Nuage’s operational director, says a big part of the process was assessing Rebox’s needs and working closely with its management and employees to finesse how the software would assist their roles. “We sit down a lot with the client,” he says. “Everything is documented – how things will work, what the screen will look like. We’re not just selling software – we’re helping [clients] sell their products.”

Rebox launched the software on Nov. 1, 2016, and its success was immediately apparent. It was instantly possible to track what employees were working on and for how long. Inventory was tracked in real-time in Canada and the U.S., driving down losses attributed to missing products.

“Knowing our inventory – that would take a weekend in the past,” says Biberkraut. “Now it’s all about traceability.”

Costs also went down amid more streamlined deliveries and less time spent locating products. “Since launching, we have been able to achieve a four-per-cent reduction on our handling costs by the insights we have been able to unlock,” says Mr. Biberkraut. “A new quality-control division was created whose focus is on saving the company money. This can only be tracked and achieved with the software we have in place.”

He says that despite having “so many different SKUs, our inventory tracking has gone from the mid-80s to 99.6 percent in terms of accuracy.”

Mr. Parent says that’s thanks to the key performance indicators (KPI) provided by the software, which allows Rebox to measure the impact its new systems are having on its operations. “The ROI [return on investment] is really fast,” he says.

Despite its success, Mr. Biberkraut concedes that the process didn’t happen without some resistance.

“I don’t think a lot of people here believed we would launch,” says Mr. Biberkraut, adding that a big part of his job was working closely with the firm’s different units to ensure everyone’s needs were addressed in the design of the software. “You need to involve everybody – you need the buy-in,” he says.

He says the pushback was stressful. “It’s not easy to embark on something like this. I had a full head of hair when I started this project – now I’m bald,” he jokes.

But since implementation, he says employees have understood the value of the new system and embraced it. They’ve realized the boost in efficiency and productivity has driven overall company growth of 11 percent. “As we grow, we’re doing more transactions,” says Mr. Biberkraut.

Rebox credits the close relationship with Nuage for fuelling the company’s innovation. Mr. Biberkraut says he checks in with Mr. Parent every couple of days and meets regularly to map out new strategies.

He’s now working with Nuage to create a supplier portal, which will enable suppliers to enter their own information, making ordering easier. And Rebox is introducing a customer portal and e-store, which will allow clients to order and reorder products online. Customers will also be able to see if parts are in stock.

“We’re a more agile organization,” says Mr. Biberkraut. “For us, it’s always, ‘How do we get better?’”

Special to The Globe and Mail